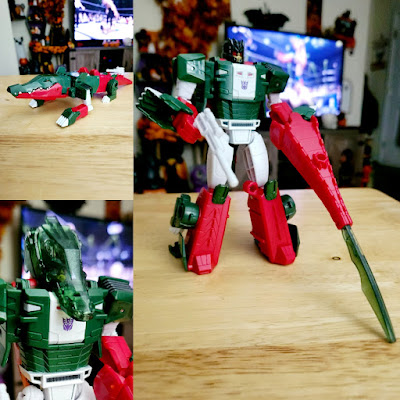 With EarthSpark around the corner, there's been plenty of video clips and teasers to get us all ready for the show to debut. I'm looking forward to it as I'm sure some of you are. Seeing that the Skywarp toy is using the Cyberverse Warrior Class Seeker mold made me wonder if Skullcruncher will his Cybervese toy mold? It's a good figure and I think flew mostly under the radar, so why not? That brings us here today as we look at the aforementioned toy. I used the word aforementioned and feel super fancy about it.

Skullcruncher is a larger Ultra Class figure that sells for around $20 if you can still find him. A Cyberverse Ultra is equal in size to a Generations Voyager for the price of a Generations Deluxe. So you can expect a simpler and more hollow toy for the money. I'm just getting that out of the way right now. It's specifically intended for children while Generations toys are intended to be collector friendly with a higher quality. Fortunately the hollowness doesn't really effect Skullcruncher too bad. It doesn't stand out blatantly. The most I noticed it was in his lower legs, which is where his thighs fold into when transforming. He's definitely light though. That'll bother some, but not others.

Like most Cyberverse toys, Skullcruncher has a play gimmick, his being 'Energon Armor'. This is a pretty non-intrusive gimmick in which a clear green alligator shaped helmet/mask pops out and covers his head. It looks kinda neat. Thanks to the transformation, his wrists swivel and beast claws fold over the hands. With that helmet on and those claws properly displayed, you've got a Battle Beast! As you'd expect, Skullcruncher transforms into an alligator. Aside from the lack of a Headmaster, he's pretty much a traditional toy of Skullcruncher. A simplified update I guess. He has quite a bit of articulation as well. In all honestly this is a pretty good toy.

Weapons are a laser gun for shooting and a pointy tail. I'm not really quite sure what to call the tail weapon as a large blade unfolds out and Skullcruncher holds in from the tails base. A pointy traffic cone? Seeing as there's no other way to store the tail in robot mode, I guess they came up with this as a quick fix. I'd have preferred it to be a shield or a backpack. The tail weapon is my only real complaint... because I don't like it. I do have another complaint, I wish his mouth opened in gator mode. That's the only real complaint I have. The weapon is pretty subjective.

Make no mistake about it, this is a toy meant for children and not adults. So, that's something you'd have to keep in mind. I wouldn't compare it to Titans Return or the Walmart 'Vintage' Headmaster Skullcruncher toy. On it's own though, matched up with other Cyberverse figures? Yeah, it's pretty good. The simplification gives it a touch of that old school charm I've talked about before. He could have been a G2 figure in terms of construction and feel. Just needs to be a little heftier and have weird random stickers. A Decepticon or transformers logo across the tail or something. I... kinda want that now.