Psychic in a Psycho World. 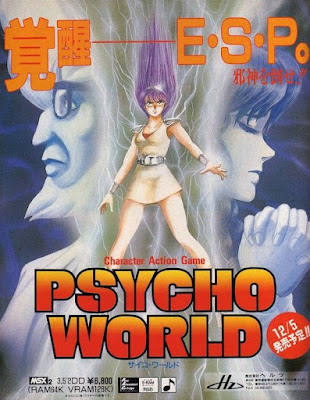 Sometimes a great game will get swept under the rugs of history. Considering how many great games come and go without a sequel, that's not really a surprise. However sometimes the great game might have been seen at one time as something special, so when it doesn't get a sequel and or gets ignored by history... well, it's a little sad. Psycho/Psychic World is one of those games. In those older days of video game magazines, it was one of those games that was clearly one of the more cool ones to be into. Originally released as Psycho World for the MSX2, it was later ported to the Sega Master System and Game Gear as Psychic World.

I've mentioned before how many game magazines made micro computers like the MSX2 seem like a whole different level of hip. That's probably got to do with the entire vibe. Games like Valis or the MSX2 versions of NES games often got that treatment. Psycho World was in that camp. The MSX2 version was a more robust game than the SEGA version for reasons I cannot understand. Those systems have pulled off some great conversions. I'm not a developer though, so what do I know? I've never played the original, only the SEGA ones, and I think those are pretty great. The SMS game definitely has more watered down graphics, however on Game Gear they were redrawn to fit the smaller display better. Personally, I think it's the better looking of the three.

The game takes place in the year 19XX. Dr Knavik and his twin sister assistants study ESP and it's uses. One day there was an explosion and Cecile had disappeared. Lucia, the remaining sister, is told that experiments with ESP had been performed on monsters. Those monsters now had rebelled and taken Cecile. Lucia is sent to rescue her and defeat the monsters armed with the ESP Booster, which gives her the ability to use psychic powers. Game play consists of action platforming with plenty of running and jumping. Those psychic powers are used as various weapons which are collected along the way. These weapons also serve as abilities to help Lucia get through each level's challenges.

I've seen some random criticism that the game is a Megaman rip off. I've never felt that way personally, but the graphics are a little similar. The Game Gear version more so than the others. It's a game firmly of it's era without a doubt and the story is definitely from it's time. As a kid, it seemed much more serious than it does as an adult who rolls his eyes at the idea of an employee cleaning up her bosses mistakes. Regardless, it's still a fun game with a cool setting. Perhaps some of those memories of how much cooler those old game magazines would make it seem as compared to others are still lingering. You won't hear much about this game anymore, aside from various play through and the odd blogger (cough). That's a shame, it's pretty great.