Don't get to close, it's dark inside (Cybertron) 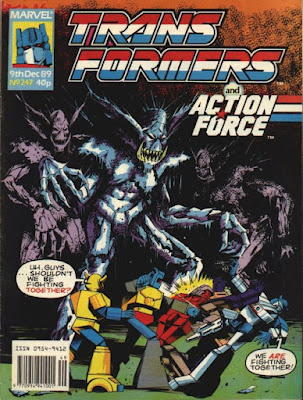 While looking at the more spookier aspects of Transformers, it's hard to ignore the Demons. Demons on Cybertron are unlike mankind's undoubtedly evil menace. They're a race of monstrous Cybertronians that lurk under the surface of the planet. Considering the whole convoluted nature of the planet, it's not to hard to fathom the place is several layers of chaotic nightmares. They're literally the Transformers evil older siblings. Considering the amount of evil already apparent in the Transformers... that's saying something.

A Demon is a very large scary looking robot monster that's able to withstand most firepower. They're generally savage creatures and sometimes can even breathe fire. In case large practically invincible monsters under the surface of the planet isn't scary enough, they also feed on normal Transformers by draining out their life force. That's a Transformers way of saying "I'll swallow your soul".