Beast Riders of the Storm 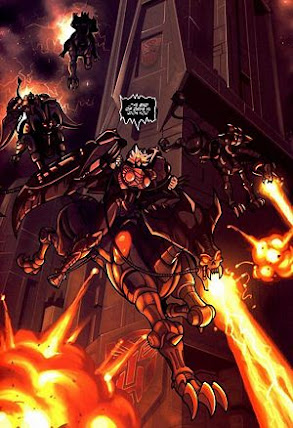 There's nothing more serious in Transformers than when Unicron shows up. The all out destruction of the Universe tends to take a little priority over the ongoing war between the Autobots and Decepticons. In case a giant demonic planet robot that eats other planets in a quest to destroy all life wasn't scary enough... he has heralds. Personally, I'd like to think his arrival would be obvious (he's pretty big after all), but still the need for someone to show up and tell everyone just how doomed they are is needed. In Energon, this got a little extra apocalyptic.

Let me wind back the clock a little. Armada was much more popular than Hasbro anticipated. So much that another line of repaints had to be made to keep product on the shelves fast. Part of the scramble for new toys was reusing some Beast Wars molds in Armada. In all new colors  with  Mini-Con ports molded on, various Transmetals joined the ranks. Transmetal Megatron (now Predacon) and Terrorsaur for the Decepticons. Transmetal Rhinox, Airrazor, and Cheetor for the Autobots. However, they sure didn't blend in aesthetically did they?

Some fans came up with the theory that the deluxe toys were in fact Unicron's four horsemen. Customs, fan art, and such were made of this idea. Simon Furman, who had been writing the Armada comic apparently came across this idea and liked it. The Armada comic transitioned into Energon and the war continued as Unicron returned. I'd hate to spoil a 18 year old comic, but it's kinda necessary. Also, that comic is 18 years old. During the big fight in Armada, Unicron took notice in the 4 beast characters and abducted them.

Later in Energon- Heralding the return of Unicron, the now evil and scary beast warriors returned... as Unicron's Four Horseman of the Apocalypse! Riding skeletal monster steeds and spouting off words of foreboding doom, the four attacked Cybertron. There was much fire and brimstone and fighting. It was a Dio album cover staring Transformers and it was awesome! Ok, some fans took issues with the idea. Most days end in a Y as well, so whatever. While the evil and scary beast warriors were defeated, they did return in the unpublished later issues.

Personally, I thought it was a pretty cool idea. While not just being different than the others toys due to their beast modes, the overall design was different from Armada and Energon's particular look. They stood out. While most of us didn't pay it too much mind, it clearly stuck out to some. Making four of the characters into demon flavored servants of Unicron was a pretty fun idea. Not to mention, the whole thing just evokes heavy metal imagery. Which, who doesn't love? We're spending the summer with a focus on all things scary and I'm pretty sure the apocalypse is kinda on label.