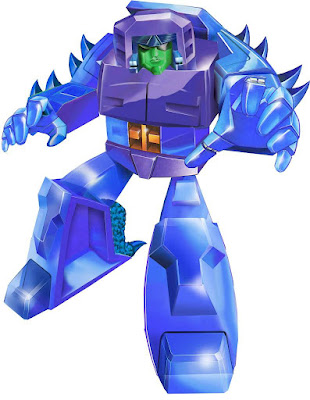 To be completely honest, I've always associated bright neon colors with summer. Probably from various water gun fights, pool floats, and various summer time stuff. Weirdly enough, despite being so bright and colorful, there's always been something threatening about neon colors. Probably thanks to their use in various cyber punk, post apocalyptic media, and Halloween costumes.

Following up on our fireworks themed post from last week is a look at the Sparkabots! Sparkabots are one of those weird areas of Transformers that are somewhere between obscurity and urban legend. I've seen a person or two dismiss their existence or disregard them as bootlegs. They are real however, and absolutely fantastic.

European Generation 2 is an extremely interesting time. G1 didn't really end. It just stopped in the States while continuing in other parts of the world. This time of Transformers in Europe is often referred to by some fans as G1.5. In the States, G2 was the relaunch of Transformers after pausing in 1990. During that two year gap in US Transformers, the G2 symbols and branding were used on those European toys... but sold as just Transformers without the additional branding until 1994. Many of these were sold in G2 later on.

Blaze and Sizzle were joined by Flamefeather and Sparkstalker. However this union only existed in name only as the Firecons were still Decepticons. The two different teams were sold under the shared banner with only two members each. Cindersaur did later join his teammates in 2010 though. The toys use the same molds, however now in some amazingly eye searing neon translucent colors. They're quite nice looking, though thanks to the unfortunate issue with translucent plastic aging... finding them in decent shape for a decent price now is a bit of a challenge.

Art provided with permission by Draconis130