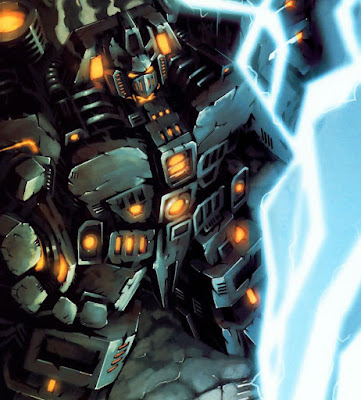 Fallen forgot his real name long ago. It didn't matter. It was a name given to him by his creator - the one he betrayed. It was a relic of the time before he had some to see the truth. The truth of Unicron.

Created as one of the original 13 Transformers to serve as a protector of Cybertron, Fallen has always been a creature of chaos and degradation. His original purpose was to oversee the stately running down of the universal clock, the ordered tick of universal balance from energy to entropy, the slow and total collapse that heralds a new creation - for what are creation and life without dissolution and death? He knew his purpose only too well, and became obsessed with the end of all things. Intrigued by the dark sciences, he came in contact with Unicron, and fell under the evil planet's thrall.

He exists now for one purpose alone: the destruction of the Seal of Primus and the release of Unicron into the universe. He lives only so that one day he might witness the last star in the universe wink out, and eternal ending fall.