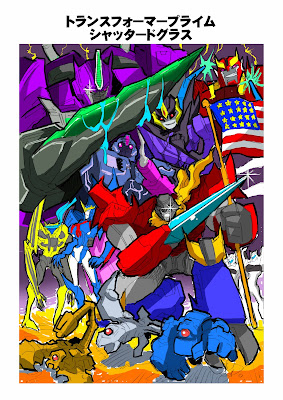 Sticking with the concepts that never became a reality subject, Hayato Sakamoto also pitched a pretty simple, fun idea around the same time as Bravemasters. Transformers Prime: Shattered Glass was exactly what it sounded like, a Shattered Glass version of Transformers Prime. It makes perfect sense for an exclusive to E-Hobby line as the Prime toys were winding down around this time. Prime itself was a very popular series.

Providing Prime fans another outlet was a no brainer, not to mention, Shattered Glass itself has been pretty popular. So much that it's found it's influenced other properties. Personally, I really liked the Prime toys and would have enjoyed the new decos on the toys. While the concept of a mirror universe is fun, the cool colors have been my favorite part of Shattered Glass. Seeing that idea on Prime toys would have been pretty great.