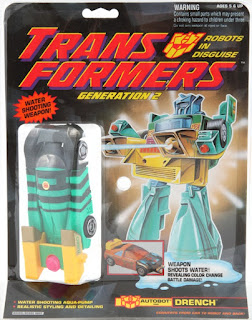 You just can't keep a good idea down. Drench from Transformers Generation 2 has just a great look. That green striped into black, the yellow spoiler with that 'TURBO' graphic. It's just a super sharp deco that makes for a really good looking toy. So good looking that...

It was planned for a Universe update around 2004, made from the Armada Wheeljack mold, which was a really good figure with a pretty similar car mode. Sadly the toy was never made, but you just can't keep a good idea down. 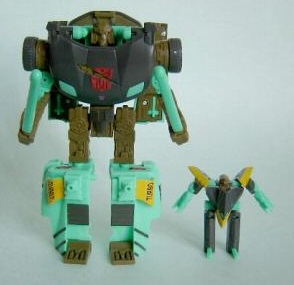 As you can tell from the test shot, and might remember from the time, Wheeljack wasn't the best name for the mold as Sideswipe would have been a better choice. It looks like Sideswipe and the name would better suit the 'traitor' character. Such an obvious oversight that... 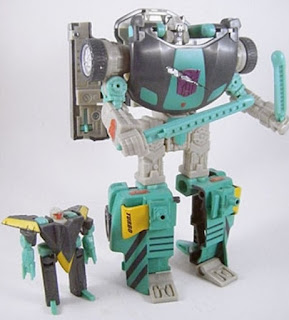 In 2008, Shattered Glass Sideswipe was inspired by the idea. Shattered Glass being a mirror universe with evil Autobots and heroic Decepticons. Characters had different colors and looks than they traditionally had, with Sideswipe jumping to the Decepticons, it just worked. Making for a great looking toy, with a great deco that payed homage to past Transformers. Perfect for a Transformers convention exclusive. I mean look at that car mode. It's a perfect homage to G2 Drench, a nod to the unreleased toy, and a good use of the mold. 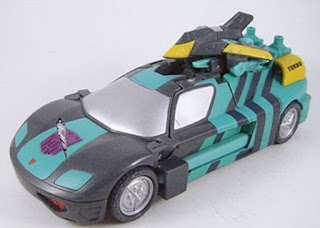 But we're not done here. Nope, not at all. Surprisingly 10 years later, in the anime SSSS. Gridman, the deco popped back up. Many of the human characters were designed to pay homage to various Transformers (not to mention other random homages) and... 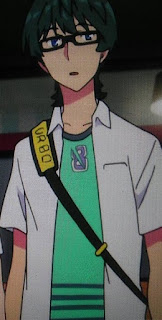