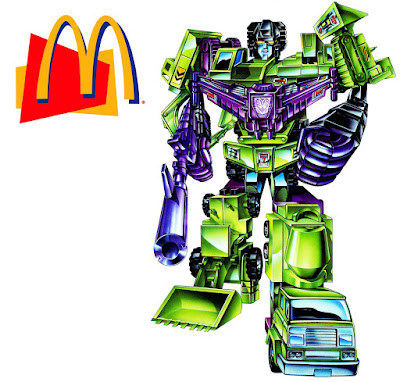 Recently I had a dream. Not a particularly deep dream. Not one where I questioned if I was re-living a past life or glimpsing into an alternate timeline. Just a dream, but it was weird. Often when I dream, I'm driving. Somewhere, not sure where, but driving. This time I was driving down some rural road. I have no clue where. I was technically working, so must have been a work trip. I had stopped for some food at a McDonald's and this is where the reason I'm posting  resides. Apparently, in my dream, McDonald's had a Transformers promotion. An exclusive Devastator.

Like how when McDonald's was a well run place of business and you could actually get what you ordered. Back then they'd have things like movies, glasses, and odd toys that you could buy as well as your food. Ronald was on TV and on the walls. It's not just nostalgia, it really used to be a place people liked and was generally well run. In this dream where McDonald's is a competent business again, they had an exclusive Devastator. From what I could tell, it was the same box set that Walmart had a few years ago. However now it came with an upgrade set! A set of new heads for Devastator to match his appearance in various cartoon episodes. It was truly amazing!

So I stopped and of course they were sold out. It was the fist day of availability and they were already sold out. Maybe it really was an alternate reality. I went to another and they too were out. It was there I saw a co-worker carrying 6 McDevastators and a copy of the Cybertronian Field Guide out the door. I had no clue this entire time we both shared a common interest. Then miffed that they were all sold out. The guy behind the counter had a spare Devastator head that fell out of the box and gave it to me. So I had that at least, I guess.

at April 05, 2022
Email ThisBlogThis!Share to TwitterShare to FacebookShare to Pinterest
Labels: devastator, fast food, in my dreams, McDonald's, Transformers, weird, Zone Base