Saint Sword 'round my neck 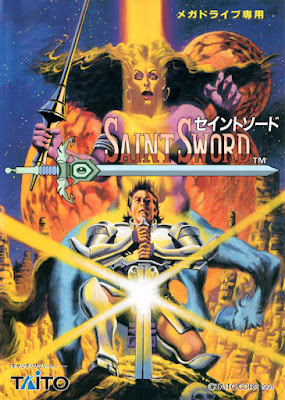 The funny thing about old video games is that there's a ton of them that you've never played. Saint Sword is a recent discovery of mine that I really regret missing out on back in the Genesis's glory days. The game takes place in ancient Greece mythology with you playing as the Titan Macress. The demoness Gorgon is trying to take over the world and you must stop her. She's either a demon named Gorgon or a Gorgon being described as a demon. That parts never really clear, but part of the charm of these older fictional settings. It's a hack n' slash action platformer with simple controls. Action platform games somehow always play good on the Genesis/Mega Drive and Saint Sword is no exception. While Macress feels a little slow, it's fun guiding him through his adventure.

As you could expect in a setting like this, you'll be fighting several monsters. The designs are pretty creative and some of the bosses are really far out. It's a Taito game, so you can expect creativity in the character designs. Macress gains abilities as he kills enemies. This includes wings and becoming a centaur or merman. It's a shame Saint Sword isn't more well known. I'd have loved to own a cartridge of it back in 1991 when it was first released and a shame it took 30 years for me to discover it. A neat game that's still fun to play with good graphics and music. I'd recommend giving it a go if you haven't already. 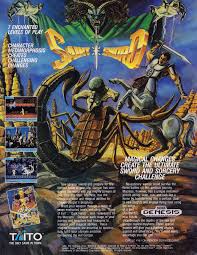