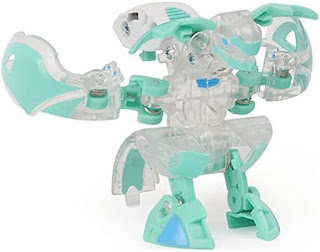 Lately I've been wishing egg-bots were more common these days. It seems like they're a lost form of transforming toy. To be honest, I wish more were available. They're neat. Then out of the blue, one weekend my mom comes over for dinner and as usual brings us stuff she bought in the clearance aisle. This time, a Bakugan toy. I've checked them out before and have gotten a few from Happy Meals. They're neat, but I have no clue why not much attention was paid to them before getting this random gift from my mother. First off, here was a dang egg-bot. The thing I'd been wanting had been right in front of my face the entire time on the toy aisle.

The second thing was, it was pretty neat. I'd thought so in the past, but like I said, hadn't paid them much attention. Pegatrix (the one I was gifted) was a little Pegasus that neatly folded up into a little ball. Not exactly an egg like Tamagoras, but a ball like ones made by Takara. It was neatly robotic and in some pretty cool colors. I then and there decided to pick up some more, and so far I've been happy that I did. In the Bakugan Evolution line is the Platinum Series, which has die-cast construction! The toys have spring loaded transformations. This works into the card game that I don't know how to play, but am keeping my included cards in case I decide to learn. It is pretty satisfying to drop the ball on a table and have it pop into it's little animal form.

This randomly gifted Pegatrix has opened up a new rabbit hole for me. With Bakugan I have readily available egg-bots that are pretty dang neat. Prices vary for various releases, but they're pretty affordable. So far I've spent five to ten dollars on the ones I've gotten. There's more deluxe packages with various accessories, multi-packs, or larger sometimes even combining figures. The Mrs was a fast fan of the Cubbo figures. I'm fond of them as well, they're adorable. It's funny, these little toys have been right in front of my face for some time now. I guess all it took was that random gift for me to do more than look at them occasionally in the stores.