Riders on the Styx 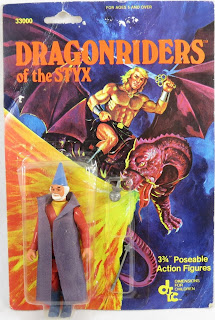 Dragonriders of the Styx was a fantasy line from the early 80's that's mostly forgotten about now. Probably thanks to being sued out of existence by TSR due to it's obvious unlicensed inspiration from Dungeons and Dragons. Made by Dimensions for Children, which is a pretty bad name for a toy company. I mainly remember getting the toys from discount and drug stores, but the larger sets could be found at regular retail. Initially the line started off with 'army man' style figures with themed play sets. Later it expanded into 3 3'4 action figures with various creatures and vehicles.

My brother and I the entire standard carded figure assortment and some of those 'army man' play sets. Satanic Panic was a thing at the time, and like He-Man, I can understand it a little here. Toys like Duelin' Devils and Demons of Castleon might raise a suspicious eye or two. Lot's of these fantasy toys at the time had some really awesome horror art on the packaging that probably skirted the line for the intended audience. I can definitely appreciate it now though and not be cynical at all when people ask what's wrong with me.

Earlier I mentioned mainly getting the toys from discount and drug stores. That's probably likely to getting sued out of existence by TSR. The realities of toy liquidation never crossed my mind when I was 6. The 'army men' style figures got bootlegged heavily, I was finding them up to the early 90's. I strongly remember getting the Wizard shown above on Halloween night. Mom was taking us home after a great night of trick or treating. We went to neighborhoods with my cousin, ate McDonald's, then trick or treated at the mall! I was Spider-Man. It was awesome.