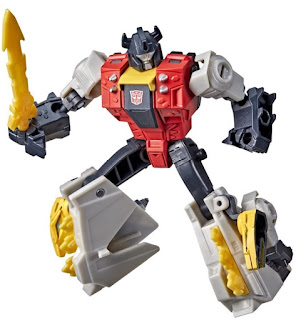 I've got a particular attachment to Snarl. It all started when I went trick or treating dressed as him for Halloween. It was a Collegeville costume, the plastic smock and mask style that often gets lumped in with Ben Cooper costumes. Amusingly, the character was labeled Dynabot on the box. My cousin was quite impressed and asked me if it transformed, in which I told him it did as I got on all fours (with requisite transformation noise). I pulled the mask over my head and began to snarl and chomp. I understand if you're impressed, he was. He was also jealous, as I suspect you are.

Thing is, Snarl is pretty awesome looking. The way his plates and spiked tail form 'wings' in his robot mode has always looked cool to me. I recently got the Cyberverse figure (pictured above). I'd been after it for sometime now. You're aware I like Snarl, but also liked the resemblance to his Action Master box art. It's a good toy, simple like most Warrior Class figures, but still a good toy.

Snarl's cartoon model got recycled as Armor Geist in Brave Exkaiser. I used to think the Age of Extinction Snarl toy would make a good update of that (and still do), but this Cyberverse Snarl would be a good candidate as well. Maybe with a new head. It's so true to the cartoon model that I could see it invoking the character well. Wonder if some kid was Armor Geist for Halloween and really likes him as a result? I hope so. 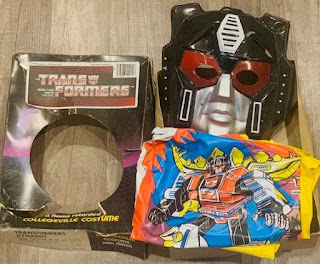