Fighting the Quantum via Kabuki 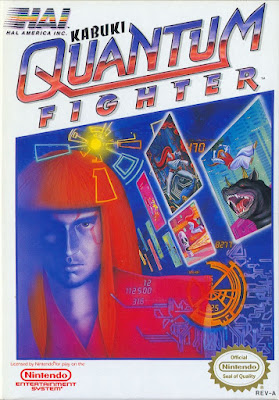 Unfortunately, not everything works out. Case in point- Kabuki Quantum Fighter (Jigoku Gokurakumaru in Japan). Clearly HAL and Nintendo planned to make this a series. You've got a very recognizable hero who says "I'll be back. Watch for my new adventure." in the end credits. Not to mention a premise that lends itself to those future adventures. Our hero, Colonel Scott O'Connor, whose transferred his brain into the main defense computer system to fight a rouge program. Of course that rouge program resents itself as various monsters and other bad guy types for our hero to fight. As a computer program, Scott's self image is a kabuki as he is the descendant of a kabuki actor.

The Japanese version is a little different. Instead, the game is a tie in to the movie Zipang with a boy named Bobby entering a computer system. Inside the system he's a samurai. The setting got switched up a little to make Quantum Fighter. It's a solid premise, not too unlike Gridman. I do wish they'd made more as it's a good game as well. I was just replaying and having just as much fun as ever. It's an action platformer, which is a favorite type of mine. Scott uses his hair as a melee weapon and various projectile/bomb attacks are obtained as you progress. It's a weird and fun sci fi setting with some scary visuals mixed in. Unfortunately it's also been 30 years since the release and no sequel. I'd love a figure of Scott, unofficial or not. I'd love a new game as well, but at least the original is still fun when revisiting.