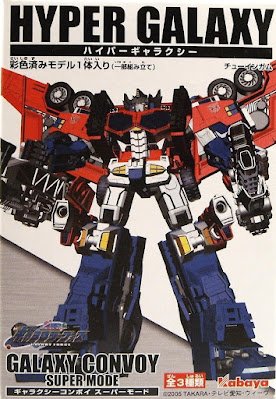 Cybertron/Galaxy Force is one of those lines that feels like the last of it's kind. It was the last series to run before the 2007 live action movie changed everything. Sure, 'classics' happened in between. However that didn't have a cartoon and generally filled out the time before the movie (which had been delayed) released. Cybertron was the last of the Unicron Trilogy (Galaxy Force was stand alone) and a fun ride. Following up on the gimmick heavy lines of the Unicron Trilogy, it took the 'activated' gimmick from Armada and improved it. I liked the different themed planets and variety of robots that came from it.

A neat Kabaya candy toy line sold as part of Galaxy Force was Hyper Galaxy. Hyper Galaxy was a figurine line sold mainly at convenience stores like other candy toys in 2005. There were 3 total figures in the line- Galaxy Convoy (Optimus Prime), Galaxy Convoy Super Mode (Optimus Prime Super Mode), and Master Megatron (Megatron). Each was individually labeled (not blind boxes) and came with a piece of gum.

The figures were neat overall. Galaxy Convoy Super Mode was my favorite with Master Megatron coming in second. The regular Galaxy Convoy was fine, just not as neat as the others. They were well painted and honestly something I would love to grab from a convenience store. I could easily see myself picking up one while stopping in for a Bueno Bar and bottle of Coke Zero. Unfortunately these cool toys don't reach my small stores. I got my set at BotCon that year. I don't remember the exact price, but it wasn't expensive. The three stood by my computer monitor for a while with some Beast Wars gachapon figures. That was a cool set up.