The smaller end of the dark side 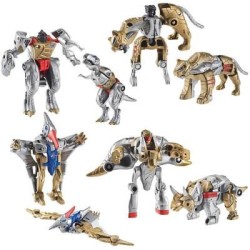 I'm in a Dinobot mood today and wanted to look back at something I was quite fond of. Considering the name of the site, my fondness for smaller Transformers isn't a well kept secret. For a while, Mini-Cons were the standard bearer for tiny TF toys. As the Unicron Trilogy ended, they managed to stay around as part of the new Classics line prior to the movies. They then stayed around some more. They've basically not went anywhere and honestly newer Micromasters are similar to Mini-Cons. Which is just the way of things as most of us saw Mini-Cons as the new Micromasters. Except my mom, she thought they looked like bowling pins. Specifically.

One of the cooler aspects of Mini-Cons is that they were heavily repainted and nearly countless figures were produced. Super fun to collect and sometimes a challenge as well. One specific set of Mini-Cons was released during the Dark of the Moon toy line. That's them in the picture above. They're obviously themed after the G1 Dinobots and versions of them were used to represent G1 Dinobots in later releases. It can be confusing and easy to mix them up. Fortunately those later uses were in the TF4 2 packs that I absolutely loved. That does help me keep them separated mentally.

The individual figures were Dualor (t-rex), Catilla (tiger), Rav (pteranodon), and Triceradon (triceratops). Despite being released as part of the TF3 toy line, they were not specifically part of it. Fictionally they fit in during Beast Wars according to Ask Vector Prime. It's not much, but it's something. Confusing, but remember, not all movie toys are specifically meant to be in movie characters. These figures were sold only at smaller stores (discount chains, pharmacies, etc.) and Big Bad Toy Store.

I specifically got them at Tuesday Morning. The Reveal the Shield Legend/Legion class figures never showed up at my local retail, but I did find them (mostly) later during this time frame at stores like Tuesday Morning and Ross. I was all to happy to snatch up these little bots while on the hunt for that Legend Megatron one Sunday. Never found Megatron, but I did get a set of these.