Nekurosu No Yousai was a very neat keshi line by Lotte sold in the late 80's and early 90's. Translated into English, the name of the line is technically Necros Fortress, but often called Neclos Fortress. Neclos is printed on the lines cards as l and r are often confused in translation. Necros/Neclos being the main villain character. Each figure would come in a box with a card and piece of chocolate. Readers know this is the exact kind of thing I go crazy for.

The line was a fantasy based with cool monsters and warriors intended to be used in a rpg game. The cards would be used for the figures stats as well as items and spells. There was a total of 320 figures released in 8 parts. The figures were in multiple colors and would often come in color change or metallic plastic depending on the release. Some with plastic jewels. I can see a fun evening spent with these. If you noticed that they resemble Monsters in my Pocket, you're not alone. It's only natural for keshi lines to look alike, especially ones based on monsters. Necros Fortress and Monsters in my Pocket do share a lot of the same monsters. Both even have video games. NES for one, PC Engine the other. A crossover would have been perfect.

Unfortunately, Necros Fortress figures are not easy to get. The line was exclusive to Japan in a per-internet time. Candy toys are no problem now, but the older ones can be a challenge. I don't have any myself but can still enjoy them through various pictures on the internet. They have great sculpts and I like the variety of monsters. I love the art. It's exactly the style and era that's a steady favorite of mine. I'm pretty jealous of those who got to experience them first hand. I could see myself in a local convenience store buying these up. 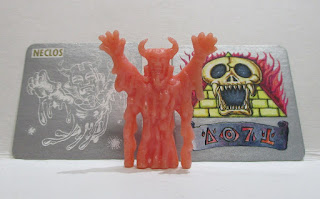