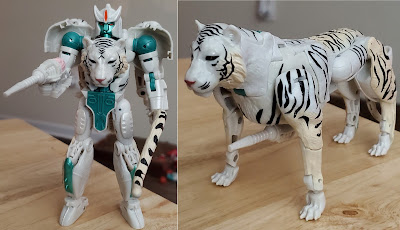 I was pretty happy to open up Tigatron on Christmas morning. He was one of the presents my wife gave me and what a great gift. I'd been looking forward to getting this new version of him since he was announced and having him is no disappointment. Tigatron is one of those great characters that I feel doesn't get as much attention as he should. The original toy was a repaint of the original Cheetor. In Kingdom he's a new mold but still definitely borrows Cheetor's engineering.

That's not a bad thing as they're both great toys. Though Tigatron is a voyager making him bigger than Cheetor's deluxe toy. That's super appropriate all things considered and feels more natural in hand. The bigger size is a definite improvement in the already solid design. His head sculpt really nails the look and once again Kingdom brings a toy that feels like it walked off the TV screen. If I had a complaint, it's that his gun doesn't work into the alt mode and merely pegs into his belly. That wouldn't be an issue if not for the fact that this is the trademark 'gut gun' and has the pink guts incorporated. I appreciate the gun being there, just wish it was worked into the toy a little better.

Tigatron is well articulated and transformed pretty easily. I can't stress just how much I appreciate him being a larger size. It's just more satisfying in hand. Even though I love smaller toys, there's nothing like a big robot toy. Some of the white parts are a different shade than others. I'm sure this is either a plastics issue or maybe the designers thought it made him look better. The white still looks great here and really contrasts well with the metallic teal of his robot parts. Tigatron has always been a really sharp looking character and that continues well here. This is one of those toys that feels more like a premium effort.