Convoy to the Stars 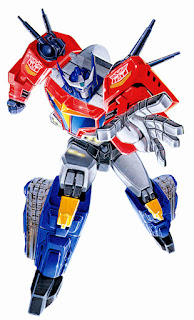 I had no clue Star Convoy existed until I was in college. Here I was, some doofy kid who really liked these things, but only knew the ones I grew up with. As the internet became a thing and entered my life I got educated on the stuff I didn't know about. That's what pre-internet life was like when you were a dorky kid. Maybe you got some information from random magazines (professional or fan) or oddball conversations. I knew they came from Japan (more or less) and there was ones released around the world that weren't here. That was about it. Sometimes some different looking ones would pop up as bootleg robot toys at discount stores. That was neat. Turns out there was this thing called Brave a well. Thanks internet!

After learning of Star Convoy I had to have one. Unfortunately it was pretty hard to get. How hard? Real hard. Was that filler? Yep. Like I said it was hard to get one, and if you were in that position, very expensive. Eventually in 2005 Unicron came, but also Takara re-released him. Now you could just get one affordably! Which I did! The reissue was a little different though. Now the yellow chest... thing was gold chrome. That and his box was more in the style of earlier G1 than the late G1 style Takara boxes. I didn't care, I finally had one. Now I just need the new versions. Well, eventually.