Zarios in the desert, a Scorp in the streets

I originally got Scorp not long after he was first released. The one in the picture isn't my original one. The one pictured is a new one I bought at ToyLanta earlier this year. He's in pretty good shape, other than his legs sag a little. Normally he stands just a bit taller, but aside from that his joints are tight and his paint isn't badly chipped. Scorp is a member of the Monster Gobots, a group of Renegades I tend to favor. You could probably guess why. In Machine Robo his name is Zarios and he's a member of the Devil Invaders. Scorp is perfectly monstery for this weeks spooky shenanigans.

As the name would imply, Scorp turns into a freaky scorpion/tank hybrid. Construction wise, he's almost entirely die cast metal with just a few plastic parts. Those plastic parts can be brittle, so finding one in this good condition (let alone for $8) isn't easy. For a toy of it's age, Zarios has some decent articulation His legs can move at his hips and knees. This is due to transformation, which also means you can pose his ankles. Arms move at the shoulders and elbow. The elbows movement is slight so you can pose them naturally as the scorpion tanks pincers. In either Machine Robo or Gobots the toy has the exact same colors. The red on black looks menacing balanced well with the crome and evil green eyes.

Scorp, like the other Monster Gobots doesn't get a lot of love. I'm not sure why, they're so cool! The newer updates for Gobots and Machine Robo characters focus on the vehicular bots. That's a shame. Mind you those are cool as well, but man these guys are neat. I'd love to see them with modern engineering. If you ever find yourself in the mood to buy yourself some of these cool freaky robots, Scorp is one to look out for. His colors are striking and design unique. He'll definable stand out among your other robot toys. 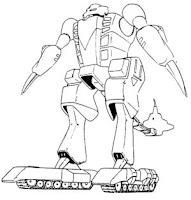