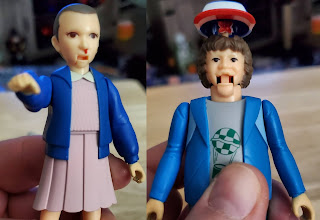 What do you get if you combine a spooky television show heavily flavored with nostalgia and then make action figures heavily inspired by an older toy line? You get one of the best surprises of 2021, that's what. Bandai has began making Stranger Things action figures (awesome). The new Target exclusive series is a direct homage to The Real Ghostbusters Fright Features figures of legend. I don't mean that lightly, these are practically lost figures that seemingly found release. Sculpted identically and even in the same scale. Series one is Eleven and Dustin as you can see in the pictures about and below. Each kid comes with a build-able Demogorgon part for extra fun. The packaging is even reminiscent of the originals. Bandai really nailed it.

Eleven who's Fright Feature is the use of her powers. Squeeze her legs together to raise her arm and open her mouth as he nose bleeds. Pushing a button on Dustin's backpack causes Dart to pop out from under his ball cap causing him to scream in terror. Bandai also has larger figures of the Demogorgon and Demodogs available as well as a more realistic Stranger Things line and even a Premium series. I'm definitely sold on the monsters even though they're straight forward figures and not Fright Features style... imagine if they did that. The future of this series will contain the rest of the kids and I can't wait. This is the perfect set of figures with the perfect gimmick. I love it so, I hope the rest of the cast get the Fright Features treatment. 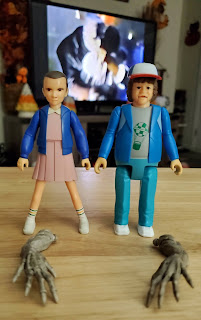