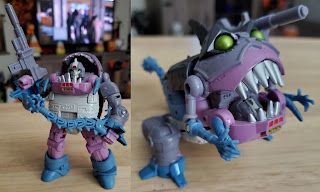 In that same spooky treat sack from the Mrs. I've talked about this week was Studio Series 86 Gnaw. While not outright spooky, a Sharkticon is delightfully monstery. Totally a Halloween appropriate robot. Honestly, they could do an orange jack-o-lantern version as a Halloween Horrorcon if they ever followed with that abandoned idea from 20 years ago. Ooh, it could be a Boglin. I'll just keep dreaming while they reward sites that steal from and shit on them instead. Actually, a Sharkticon is basically a robot Boglin... I'm super glad I just made that comparison. Now I'll never unsee it. Man... let's watch that awesome Japanese Boglin commercial again.

Man, I love that thing. I also love Gnaw, how couldn't I? He's this big round monster full of teeth with a robot mode that makes me think of a Gamorrean Guard. Considering all the Star Wars influences in the 1986 movie, that may not be coincidental. My brother got a Gamorrean Guard mask the same Halloween Return of the Jedi came out and wore it until he was too old to trick or treat. This toy is pretty damn great BTW. Full of articulation and character. Like all the other Studio Series 86 toys I've gotten, it looks like the character walked off my TV and became a toy I took bad pictures with on a TV tray in my living room. Just wonderful.

Gnaw transforms relatively easy. His arms becomes the shark monsters legs while his leg fold up behind him. There's a backpack that adjusts to cover those legs and forms the shark monsters back. The whip weapon connects to that for a tail and the robot head hides away as you fold the monsters big mouth over his shoulders. His gun can be mounted for a little beast mode fire power and the shark fin can be used as a dagger as a bot. Gnaw isn't just a show piece, but a well executed toy. To quote that guy Chet who lived across the street when I was in the 5th grade "he's pretty bad ass, Gnaw meen brah". Well, I assume that's how he talks now. It's the south and he once told me life is pretty wild when you play with madness like he does. That year I really wanted to be Eddie from Iron Maiden, but instead was Jason Vorhees with a bootleg fright mask. Am I forcing a bunch of Halloween stuff into this because it's almost here? Yep.