There's gold in that Coffin 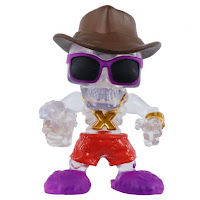 I've been a fan of Treasure X since discovering it a few years ago. Admittedly I haven't kept up with it as much as I'd like to, but have always appreciated what they're doing. The newest series however, wow, so awesome. Monster Gold follows the pattern of digging through a variety of clay and potions to find a figure and treasure. The figure is a hunter that got lost finding the treasure himself! I love that odd little fiction. This time the figures are various monsters and the treasures are wonderfully monstery as well. As usual there rarest treasure is a gold dipped piece, a spider in this series.

This past weekend the wife and I exchanged spooky gift bags. A tradition of ours during the Halloween season for a little extra fun. She put a mini monster and a monster coffin in mine with some other spooky treats. Treasure X is such a neat line, she usually includes some in most gifts for me. It's hard not to like... for me anyway. The mini monster is a basic sized figure in a small coffin. Inside the coffin is a spider-webbed bag full of floam intended to be the spider webs and eggs. diffing through the stuff finds various parts. Once freed from it's sticky tomb, you've got your hunter and treasure! I got Invisibling (pictured above) and the gold spider! First pull and I got the rare treasure! It's name is Bling Back Spider btw.

The monster coffin is a more involved affair. It's much larger and a lot more messy (check out the commercial below). First off you take the attached crowbar off the coffin lid to open everything up. Under is a spiderweb bag full of floam containing monster eyes and a bug. Also are two packets of potion and a suction cup.That's all sitting on a removable tray. The tray is sitting on a paper spider web layer. Mix the two packets of potion in a cup of water and pour it on the spider web paper. After a minute of fizzing and bubbling the monster inside the coffin RISES UP! I got Count Goldula, a blue rockabilly vampire. There's also a specimen jar containing a brain.

Remove the monster from his coffin, take the crowbar, and BASH HIS HEAD IN. No really, you straight up break his head open. Inside is... THE TREASURE! I got another Blingback Spider! Two rares in a row. Neat! Afterwards, the brain from the specimen jar goes inside the head now acting as a button to open the monsters jaws. The jar is now where the hard won treasure is to be displayed. That suction cup from earlier? It attaches to the lever inside the coffin to reuse for later rising from your tomb action. Those eyes? Stick them in the monsters head. What if you get multiples? The figures (both large and small) can exchange parts for new monster creation! It's encouraged in the pamphlet! Exclamation point!

There's also an extra big lab set with even more to do, it's in the video below. Treasure X has a way of turning blind bag toys into a game and that's pretty fun. The new Monster Gold series is just the right thing for a Halloween party. I know with the pandemic lot's of folks are still nervous taking their kids out trick or treating, I can see a Monster Coffin set providing some spooky fun over some webcam Halloween parties. It's a combination of Mad Scientist and blind bag that I never saw coming. Man, what if they made...