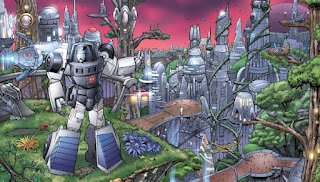 It feels like ancient history now, but then again, I suppose it was almost 20 years ago. At the time some major drama in the Transformers fan world went on that seemed larger than life. For outsiders- the Transformers fandom is more of a subculture than other fan bases. It's a little world of it's own that many members stay pretty wrapped up in. These days it's much larger and segmented, but it used to be much smaller and more tight knit. This particular event took place from 2003-2004, when things were starting to get a growth spurt. The internet was becoming more of a common thing and message boards for various interests were popping up all over. These were quickly taking the place of older online gathering spots, much to the dismay of some assholes.

There was one constant, BotCon. Prior to the last years, it was a smaller more personal affair back then. There were occasional attempts at other TF conventions and some TF programming at other shows, but BotCon was pretty much viewed as the only one. It was like our annual family picnic and a must go destination for many. Hasbro supported the show, but it wasn't officially official until around 2002.  I'm not going to go into the complete history of the con, but here it is of you're so inclined. In short, the brothers who founded it had a partnership with their friend Glen a few years into the cons life. This partnership ran the show for about 6 years. In 2003 they had a falling out and split up. Glen who owned the official license would go on to run the official fan club and con now named The Official Transformers Collectors Club/Convention (OTFCC for short). The brothers would run BotCon as an unofficial show in 2004. And within the fan community, a battle line in the sand was drawn.

Remember how I said BotCon was a pretty bid deal earlier, well, to some people it was the biggest deal. Supporting OTFCC was the highest heresy one could commit. Self important gate keepers preaching gospel onto a soapbox that they assumed everyone obeyed. I don't think the founders enjoyed it either. I wasn't too concerned about the whole matter myself. The way I saw it, the split wasn't any of my business. Both sides seemed to insist that we support each others shows if we could. I was fine going to the newly named OTFCC. I'd have liked to go to the 2004 BotCon, but it was in California which was a bit too far for me. I did buy a non-attendee package though to support it. If anything I thought it was a shame that the friends had a falling out.

Then things got ugly. Remember those gatekeepers I told you about? Their dogma included people that didn't agree with them were the worst humanity had to offer. This wasn't new, these types had already decreed such over other things you dared disagreed with them about. Liked a cartoon, toy, comic, ice cream flavor they didn't? That's because you're stupid and also the scum of the earth! Not because of you having your own opinion and the right to have it or anything.

As ridiculous as that sounds, believe it or not, there was people who went along with it! Once again, for the record, I don't think the founders or Glen endorsed any of this. It's not exactly a good look for your convention to call attendees of another 'pond scum'. I tried to stay out of it for the most part... until they drug me into it. I was young and admittedly more bone headed. Somebody would say I had no honor for going to OTFCC, and I'd reply 'who talks like that? What bills around my house do you pay to tell me where to go on vacation?'.

In the end, Glen had his license pulled shortly after the 2004 OTFCC. Things didn't go the way planned and Hasbro awarded to Fun Publications. The show was rebranded back to BotCon (the brothers were back on board) and they ran it from 2005 to 2016. I felt bad for Glen whom was a friend, but also was relieved for all the nonsense to find some sort of an end. I didn't care who won the so called 'war', I just wanted to enjoy my hobby.

My mindset towards fandom drama was always dismissive as it usually had nothing to do with Transformers or why I liked them to begin with. Normally it was some gatekeeper or self righteous individual who was causing a problem. It's a similar story you've heard throughout history, just on a more obscure scale. Fun Publications ran a much different show that coincided with the rise of the live action movies. Our little con was no longer a little con and our little world was about to explode. Things were never the same again.

BotCon's over now, retired in 2016. There's a revival planned as an unofficial con, but nothings really seen the light of day past some talk here and there. There's other cons now, I stopped going to BotCon after 2010. It wasn't the same any more and I was tired of pretending it was. I found smaller, unofficial cons closer to what I wanted. Though I haven't been to one in years, content to go to local shows. I do plan on going again someday. Hopefully without being called pond scum. 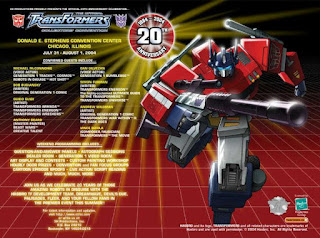