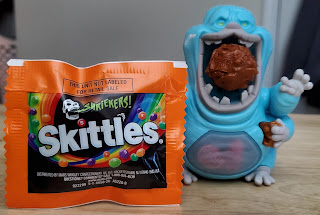 Skittles is a long standing star of the trick or treating experience. So much so that they're no stranger to putting out special Halloween varieties of the beloved candy just for the occasion. A few years ago Skittles upped their Halloween game with Zombie Skittles. A bag of spooky themed candy with mystery zombie pieces that tasted like shit in the mix. They were really gross too. Last year as we were cleaning up after the trick or treating was over, I was sharing a bag with my Mom. My mother who was raised by working poor parents whom survived the Great Depression. Parents who drove home the belief that you do not waste food. EVER!

Such a deep rooted belief that she even quit a job working at a hospital cafeteria because she couldn't stand to see them waste food by throwing away what was left at the end of the day. Mom got a Zombie Skittle and the look of pure disgust had the wife and myself telling her to just spit it out. You could see the battle going on in her head. A lifetime of programming battling it out. She spit that candy out with a look of victory. It was just that nasty, nasty enough to defeat 70 years of a belief system. That's just how gross they were.

So maybe they were a little too icky. Skittles replaced the Zombie Skittles this year with the brand new Skittles Shriekers! candy. It's an improvement to say the least. Instead of the gawd awful Zombie mystery pieces, you get the super sour Shriekers! mystery pieces. Same idea, just a different surprise experience. For the record, they're pretty dang sour too. I've got a bag and honestly like them quite a lot. The regular candy is really good,and the sour... is a new kind of pain. Leave it to Skittles, one of the best Halloween candies, to deliver a solid trick in your treat.