Shadow Panther, Best In The World 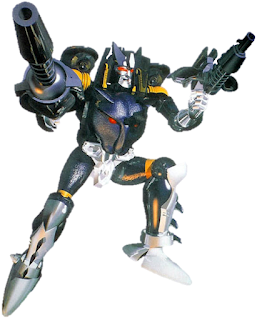 I'm looking forward to finding Kingdom Shadow Panther at my local stores. I've always liked the guy, it's a simple Cheetor repaint that just works. Part of my admiration for him comes from the way I got the original one. BotCon 2002 I was roaming the dealers room looking for some good deals. The dealers room was a lot more fun back then, more weird stuff, more of a community atmosphere. It really was a different world back then. You may not have known everyone, but you always felt you were part of something. I was looking around and a dealer had the Beast Wars Metals Jaguar X-9 (Beast Wars Ravage) figure for a really good price. I'm blanking a little now on the number, but it was a steal. I realized I only had about $20 bucks on me and needed to use the ATM machine.

These days almost every dealer has one of those card readers for mobile devices or a way to process your card. Not so much back then, it was a cash only business. This usually meant the ATM's in the convention centers were always out of cash and you'd have to find an nearby one at a moments notice. Which is what happened and I found myself running to the adjacent parking lot machine. By the time I came back, all the X-9's the dealer had were gone and noticeably other dealers now had a X-9 for sale. Also noticeably marked up. While I was there in front of the dealer who originally was selling X-9 for a non-predatory price, I saw he had Shadow Panther really cheap. In box, unopened, super cheap. I had been wanting one and knew a sign from the universe when I see one.