The Adventures Of Bumblegrim And Mandy 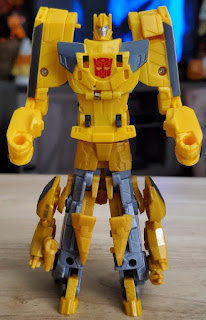 I don't know why or when the Buzzworthy Bumblebee was decided to be an outlet for older toys molds or why Target was the place for it. However I'm enjoying it, so whoever had that idea, good job. It takes me back to Universe. When Universe was a place for mold reissues in interesting new colors not when it became the new banner for Classics. Before it became Generations. Damn Hasbro, y'all got to get these names worked out.  Regardless, it reminds me of the first version of Universe when it was a fun outlet for repaints. I was a fan of Crash Combiners, so obviously I'm all for more of them. 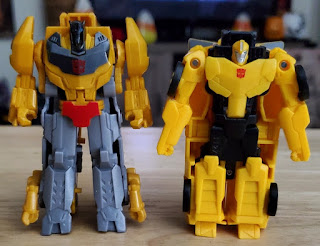 I found myself in Target this past Saturday and grabbed Bumblegrim. Despite being RID 2015 toys, with the Evergreen box art, I'm guessing these are supposed to be regular G1-ish Bumblebee and Grimlock. They're certainly colored more to be that way. Also, they have the new naming of 'Crash and Combine' on the packaging instead of Crash Combiners. I guess it's to describe the gimmick without using a potentially expired trademark. The toys look good, a little better than I remember actually. I'll admit the alt forms are a little rough, particularly Grimlock's. Combiner toys often sacrifice one mode for the benefit of the others and it's definitely the dino mode. Bumblebee doesn't come out too bad, just not great. They're pretty simple transformations as you can expect. 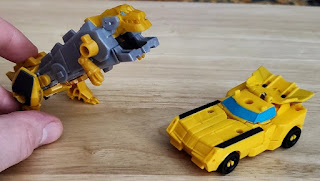 The combination is basically the act of cramming the two together. Grimlock you have to pre-arrange to properly get him to form into Bumblegrim's legs. Bumblebee pretty much goes directly from car to upper body. This is the kind of toy where the gimmick is actually the toy more-so than the figure. It's a fun and silly little robot toy meant to be played with. As a super mode, Bumblegrim is ok. He's basically Bumblebee with a Optimus type helmet. I wish there was a weapon. I could really see a sword in those hands. After a few years, it's good to play with a Crash Combiner again. They were just this odd little thing that was fun while it lasted... and are still fun a few years later.