Magmax looked awesome on a video rental shelf. That cool robot fighting what looked to be Mecha King Ghidorah in space was hard to deny. It was rented and brought home for a weekend of space robot adventure fueled by Ecto Cooler and some pizza. The game I brought home was not the game I had thought I rented. Thanks to the pictures on the back of the box, I had assumed you played the robot the entire time. Not so much.

Instead you start out as a small space ship flying and shooting your way through a horizontal playing field. As you go, parts of the robot are collected slowly building the full robot. Of course every hit looses a piece of that robot. The game never ended, just went on a continues loop until running out of lives. Occasionally you'd face the big bad boss Babylon, the Mecha King Ghidorah look alike I mentioned earlier.

Magmax wasn't what I expected going in, but still was a lot of fun. I'm mostly familiar with the NES version though it's on a variety of other systems. Originally starting it's life in the arcades, which explains the endless nature of the game. Just keep shooting until you run out of quarters. The game isn't completely forgotten by time, but doesn't come up a lot either. I do see occasional fan art which is nice. I'm not saying it deserves a much better legacy, but it would be nice if more people knew what I was talking about more often. Which is at least a quarter of this site's content. 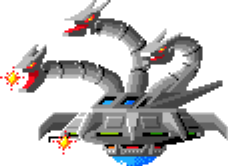