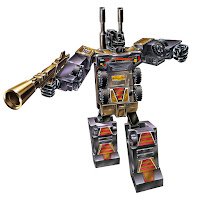 The battle between Autobot and Decepticon for the Power Core Drones was one that would determine the course of a new generation. Two Transformers crouched in the snow, both precariously low on energy. Around them were scattered four drones. Then, laughter rang out beside them.

“You should know that victory all comes down to strategy… Unite!”
As another Transformer, Combatmaster, calmly appeared on the battlefield, the four drones obeyed his will and merged together with him.
“Ung.. How could the Decepticons know about the project… They’ve got their own Master Class?”

Paying little attention to the gravely wounded Choppermaster, the cool-headed strategist Combatmaster lifted his injured comrade up off the ground.
“We’re called ‘Master Chaos.’ Of course, you’ll be the first and the last Autobot to ever know that name. Farewell.”

Speaking these words, Combatmaster fired off a barrage that struck the snowy slopes far above them. Moments later, the area resonated with a soft echo. The sound grew louder and louder, and soon a thundering avalanche swept toward them. Leaving the wounded Autobot to meet his fate, Combatmaster flew off into the distance.

Inside the secret Decepticon underground base, Combatmaster saluted the visage that appeared on a wall monitor.
“Very soon, High Regent. All of the Power Core Drones will be under our control.”
The figure he addressed showed not even a hint of emotion in response, with a face as expressionless as a mask.
“Use the combiner created from your data as a diversion… While the Autobots are occupied, we shall seize victory. We are the rightful masters of the next generation.”