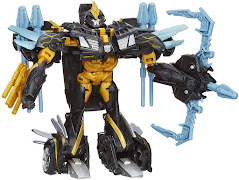 Tales of the Beast Hunters - Chapter 23

After the injuries he suffered in the raid on the derelict starship, Bumblebee understands why Autobot Ratchet has him on light duty. That doesn't make patrol alongside Prowl any less frustrating. He feels fine! So why can't he be out with the rest of his team kicking Predacon tail? With Predaking defeated, the Autobots are free to chase down the rest of the beasts, and hopefully neutralize them before their leader even realizes they're alive. And yet here Bumblebee is, driving down remote backcountry roads alongside Prowl, who wouldn't know action if it raced up and dented his fender. Just as Bumblebee decides he's in for the most boring mission ever, there is a crack like thunder from the sky. Then Megatron streaks down out of the stratosphere, his cannon firing a pulse of energy that blasts the top off a nearby mountain.