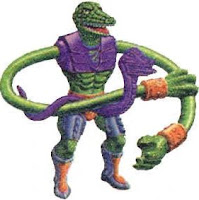 When it comes to the various bad guys He-Man has to deal with, the Snake Men make the most sense. A group of reptilian people really fit in a fantasy themed setting. Each member is a little ridiculous, but Masters of the Universe itself is over the top. Then there's Sssqueeze. He has some long ass arms.

The idea is to simulate a snake constricting. That's not a bad idea and it makes for a pretty neat gimmick. You can wrap Sssqueeze's arms around He-Man in deadly affection. Part of me always has wondered if he just took big swiping punches to clear a battle field. It's not so much the fist that you'd need to worry about, but the forearm. Think he ever tripped over his arms?

BTW, you guys seen the Revelations trailer yet?