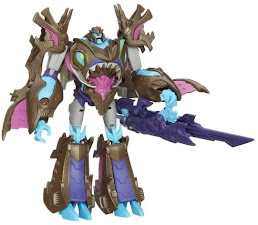 Tales of the Beast Hunters - Chapter 22

Trapped in a tangle of ancient wreckage, his comm unit so damaged that he can monitor what is happening on Earth but cannot transmit, Megatron seethes with rage. He gropes around in the pitch black silence of the ancient wreck, but he feels nothing but rubble. Until suddenly, his hand happens upon something new. It is the grip of a weapon - unclaimed by the Autobot raid - one that is familiar, though he never thought he would hold it again. He feels memories stir deep within his data banks, and remembers a time long ago on a world consumed by savage hunger. His damaged systems surge to life. The jagged metal pinning him shifts, then twists and warps, bonding itself with his body, repairing damage, but also changing him. His nightvision systems restored, he looks down at the weapon in his hand. It is an object of incredible power - enough, perhaps, to bring the Predacons under control, and do away with the Autobots for good.