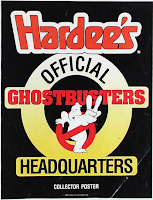 Hardee's used to be a place people liked to eat at. Now they're generally located by an off ramp with a 'under new management' sign up every few months. I can't tell if it's abandoned or just a Hardee's. Regardless of it's current state, they had a Ghostbusters 2 promotion in the summer of 1989. It's Ghostbusters Day (as I'm writing this) and a great time to talk about that.

I ain't 'fraid of no ghost.

But I'm terrified to eat at my local Hardee's.

I've actually talked a little about the Ghostbusters 2 promotion here before. I wanted to talk about it again. Because I like Ghostbusters and am a sucker for fast food promotions. This one in particular had a ton of neat stuff. There was collectible cups which were large sized plastic cups proudly displaying the movies logo. At the time large plastic fountain drink cups were not a common sight, so it felt a lot more special than it was. Such a thing would generally be reused a few times before being repurposed as a pencil holder on your desk.

Then there was the Slimer Sundaes. It wasn't much in hindsight, a cup of vanilla soft serve with some green slime syrup. But 30 years later I'm still thinking about it. There was the Ghost Blasters. I specifically talked about them in that prior post. My Dad hated them. The coolest though, was the kids meal. Your food would be served in a plastic box shaped like an Ecto-1, a Gigameter, or one of two ghosts (Slimer or purple guy). Kid's meal containers shaped like things was a Hardee's specialty. They'd come with stickers for customizing. It was a pretty good time that I'd love to do even today. Like right now.

There was also posters for the movie available. Just in case all the Ghostbusters 2 signage around the restaurant wasn't enough, you could take more home and hang it on your bedroom door. The posters had attached coupons for return visits. Which maybe if you did, you would have gotten one of the plastic lunch boxes. I never saw these myself, but maybe you did. With Ghostbusters Afterlife coming soon (I swear if there's another delay) I can only hope for a burger place with a promotion as cool as the one Hardee's had.