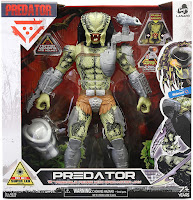 Lanard has been really knocking it out of the park in recent years. I've been speaking nothing good of them here for a reason. Lanard has always made low priced toys, most notably their 'The Corps!' line which can be a lot of fun. However since 2017, they've been doing more licensed lines in addition to some really far out cool original ideas.

Last year their 90's flavored Aliens line captured a lot of attention which lead to a more premium collectors aimed Aliens figure series. This year they've followed that up with The Predator and I'm pretty happy that they did. So far the line consists of a large 12" figure ($20) and three smaller 7" figures ($10 each). Like other Lanard toys here in the states, they're a Walmart exclusive.It's hard to complain about going into your local Walmart and finding cool toys like these for not a lot of money.

The figures a super nice with lots of accessories and plentiful articulation. They're well sculpted and have a lot of paint detail. The three 7" figures are each based off a different Predator from the different movies with very distinct differences. The masks on the 7" figures are not removable, but is on the 12" toy. The 12" toy also has a few extra play features like a light up laser for his shoulder mounted cannon as well as opening mouth. The mask thing is obviously a result of the lower prices as is the more sparse paint details on each figures backside. It's not super concerning to myself, though I'm sure some in the more premium figure crowd isn't going to like that. Personally, a great Predator figure for $10 is pretty awesome.