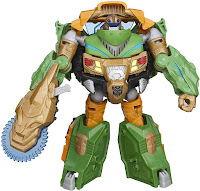 Tales of the Beast Hunters - Chapter 9

Bulkhead can't deny that the new weapons brought back to base by Bumblebee are pretty cool, but no one can figure out how to activate them. Autobot Ratchet is working on it in his lab, but Bulkhead would rather smash stuff than study, so he's been out in the middle of the desert for hours, trying to get the thing to work. He's just about to give up when Ripclaw plunges out of the sky and smashes into him. Before Bulkhead can react, the unknown dragon's tail claw grips his chest and rips away a chunk of armor. Even as the big Autobot pounds on his beastly opponent, giving as good as he gets, he feels the poisonous heat of the dragon's mech venom searing his circuitry.