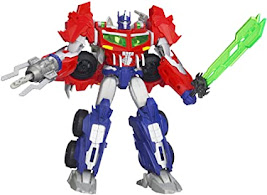 Tales of the Beast Hunters - Chapter 5

The moment the distress call sent by Wheeljack crackles to an abrupt stop, Optimus Prime springs into action. He orders Autobot Ratchet to overload the ground bridge enough to send him - alone - deep into space to join the fight against Megatron and Predaking. Ignoring the Autobot scientist's warnings that doing so will fry the bridge, leaving the Autobots without fast transport on Earth, and Optimus Prime no way home from space, he leaps into the glowing ring. Instantly, he finds himself in the swirling chaos of combat, fire lashing the air and smoke obscuring his optics. In the space of a moment, his warrior's mind grasps the situation, and he leaps into action, firing every weapon at his command at Predaking, hoping to give Bumblebee and Wheeljack the time they need to escape.