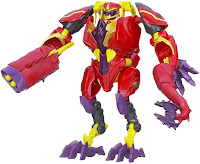 Tales of the Beast Hunters - Chapter 3

Even as he floated helpless in the darkness of the Hyperevolution Chamber, Lazerback could hear what happened around him. He heard much of what Shockwave said in his strange voice, and he knew before he emerged what his plan would be. Now, freed from the chamber, he is no longer interested in what the Decepticon scientist who cloned him has to say. Lazerback refuses to serve under anyone, not an overlord like Megatron or a conqueror like Predaking. Instead, he is determined to see chaos reign. Stealing a tracking device from the lab, he blasts off hoping to see chaos made king by the destruction of two tyrants who stand in his way.