Laser Bolt, Because Why Not? 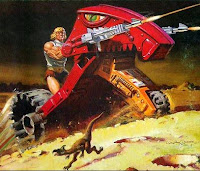 Anything goes on Eternia. One can ride a giant cat or a robot horse, maybe a satanic lawn mower or a shark tank into battle. Whatever the deal with the Dragon Walker is, anything is fair game in a fight. Sometimes He-Man just feels like riding a damn tricycle into battle. Before I go any further, I'll remind you he's royalty. He's the prince of Eternia and one day will be king. Combine that with also being a super powered being made of magic and they just let him do whatever the fuck he wants.

In his damn underwear.

The Laser Bolt is three wheeled with laser guns with a dragon's head. It can be ridden laying down or stood up on it's wheels. All jokes aside, that kinda makes sense. Ride in, raise up and fire away while the rest of the vehicle acts as a shield. The dragons head doesn't really serve any purpose other than looking cool. I'd like to think the eyes are a way to see while driving that thing. I'd also like to think 'Heaven's on Fire' by KISS is playing on the stereo as He-Man rides into battle... or the drive through at Taco Bell. Weirdly enough, the Laser Bolt was only featured in the Christmas special episode of the cartoon. It uh... flew.