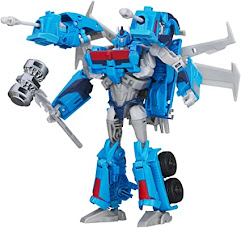 Tales of the Beast Hunters - Chapter 16

Ultra Magnus sees the massive Predacon coming from a mile away. He doesn't know who the big dragon is, and he doesn't care. All he knows is that the dragons are dangerous, and must be defeated. He converts to robot mode and leaps into the air, bringing the Forge of Solus around in a shattering blow that would destroy a lesser robot. Grimwing takes the blow, and is only momentarily fazed. The battle is short, violent, and never in doubt. It ends with Ultra Magnus on the ground, disarmed and barely functional. Grimwing stands over him. "Pathetic," he says. "I hoped to learn something from you, but this new race of Cybertronians must all be liars and savages." He leans down to look into the optics of his Autobot opponent, "Be warned. This world is in grave danger from my fellow Predacons. I will restrain them. You and your fellows stay out of my way or be destroyed." And then he is gone, leaving Ultra Magnus dented and smoking in the dust.