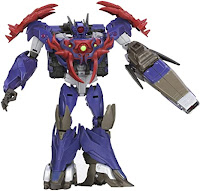 Tales of the Beast Hunters - Chapter 11

With Megatron gone missing, Shockwave makes the decision to end his Predacon cloning program. A force of Predacons, united under Predaking could spell doom for the Decepticons as well as the Autobots. He is in the middle of shutting down his Hyperevolution laboratory when he spots an Autobot spy hiding in the shadows among the still-occupied chambers. A plan forms in his precise and brilliant mind: Destroy the Autobot and the lab, and lay the blame for the annihilation of the cloning program at the feet of Optimus Prime and his soldiers. Such an event would drive Predaking into a rage that would doubtless utterly consume the Autobots in its fury.