Ninja Strike As If A Force... Of Ninjas 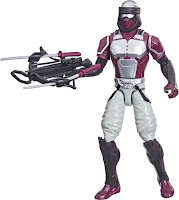 The new Snake Eyes movie is coming out soon and with it new toys. The GI JOE Classified series has been running since last summer and has been a challenge for most to collect. Fortunately for me, I haven't been too concerned. Between the Dollar Tree figures and the Jada series my needs have been filled. Though I would like some new action figures and the movie tie in line is delivering exactly what I'd like.

When it comes to GI JOE, I like the more far out stuff. Included with that is the various ninjas. This new core Snake Eyes line pretty much a modern version of Ninja Force... and I couldn't be more happy. I say core line as it's not in the Classified series (don't worry, there's new stuff for that line as well), but more of a mainline set of action figures.

Like Power Rangers and Star Wars toys I tend to prefer those (but I do get the occasional 'collectors series' figure). These are not 3 3/4, but 6" figures with what looks like a fair amount of articulation. Similar to core class Power Rangers toys by Hasbro. Which I've been loving. There's some fun stuff here. Of course Snake Eyes and Storm Shadow are there, as well as Scarlett and The Baroness. There's also Red Ninjas and Night Creepers which fills me with pure joy. I hope more characters follow suit in this new core class series. This is more what I look for in GI JOE toys than Classified. Not to mention... I don't anticipate having as much of a hard time getting these as Classified fans have trying to get their figures. Yikes.