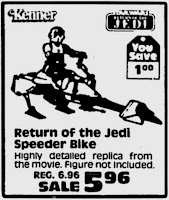 The Return of the Jedi Speeder Bike is badass. If any part in the movie sold toys in the entire Star Wars saga, it's the Speeder Bike scenes. Part of me wishes they got their own movie. The part that likes badass things. Of course Kenner was quick to introduce the toy as obviously every kid would want one. The toy was a pretty well done replica of the vehicle as seen on the movie.

Even with the limitations the classic 5 points of articulation imposed on it's design, the toy still looked the part. Newer toys of course have been more accurate, but I'm talking about the original. The spring loaded explosion was a great way to have a dramatic death of your own creation. Not even going to lie, I had Luke crash one into the Emperor. Much more satisfying than throwing him down a randomly placed hole in the Death Star... why was that there? Nobody thought to put a fence over it or anything?