Codzilla: King Of The Sammiches

I'm a sucker for clever marketing. Red Lobster decided to hop on the Godzilla bandwagon (thanks to a certain popular movie) and market their new Crispy Cod Sandwich as Codzilla. Why would they do such a thing you may ask? Because it's HUGE. Needless to say I was sold and had one Saturday night. This was mentioned during the Mortal Kombat post. It's a pretty big deal.

I picked up the bun and put it back down, as it wades toward the TV tray in the center of my living room. Codzilla.

Codzilla, as you'd expect from a seafood restaurant was a fried fish sandwich. An enormous piece of cod on a tasty brioche bun with cole slaw and tarter sauce. Thankfully the tartar sauce was served on the side as I don't care for the stuff. Like everything else though, I did squirt some ketchup on it. It's not an official tie in or anything, so really I bought $80 worth of Red Lobster because of a image and I'm not one bit sorry. Do you know what it's like to eat left over mozzarella sticks for three days? Awesome. 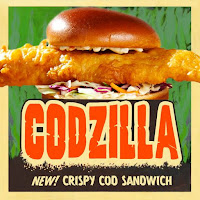