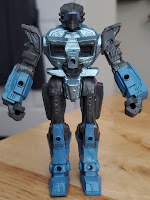 The coolest member of Alpha Team 1 is the A.C.R.M. Piloted by a disabled 15 year old kid named Boyd via virtual reality, the mech unit is a heavy hitter. The Air Assault weapons pack completes the figure adding wings, boosters, and gun pods. It's pretty hard not to look at this figure and be impressed. Especially as it only costs $1. A.C.R.M has been a pretty popular toy for customizers as well. I've seen everything from alternate colors to takes on other characters with the figure as the base.

Like all of Final Faction, this is a 3 3/4 figure with 5 points of articulation. Similar to the Synthoid, it's a much more chunky toy and looks bigger in pictures. Also like the Synthoid, it's one of the more impressive figures in the line. At Toylanta, I was showing Buddy the figures and the two definitely blew him away. I don't want to oversell the toy, but it really does feel like a much more expensive than it is.