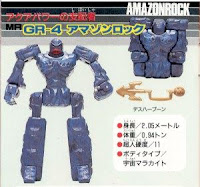 Stonehart is the largest and cruelest of the evil rock warriors. He takes special delight in teasing his enemies before defeating them. Extremely unpre-dictable, Stoneheart's first loyalty is to himself and even Magmar thinks twice about crossing him. Stoneheart fights like a raging beast, his Slam Ray hammering foes into rubble.