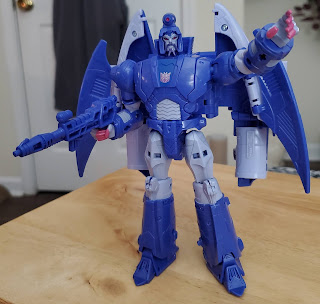 I was lucky enough to stumble across Scourge from the new Transformers Studio Series 86 line. As opposed to normal Studio Series figures, the 86 line focuses on the original 1986 Transformers movie. Bringing nicer quality versions of the cast to store shelves with very screen accurate toys. Paired up with some of the non-beast Kingdom figures being released, this makes for a very good looking movie cast update.

I've always liked Scourge. Visually, he's the transformers version of an evil sorcerer from your brothers Dungeons and Dragons books. In the 90's a fan described him and Cyclonus as wizard and knight bodyguards for Galvatron. I could never forget that mental imagery to this day. His beard, wings, pointy fingers, and collar just help give him an evil look.

Toys of Scourge never really nailed his classic look from the movie and following cartoon seasons. They've come close. I think until the Titans Return toy, the closest was the Titanium figure. I really liked that one. 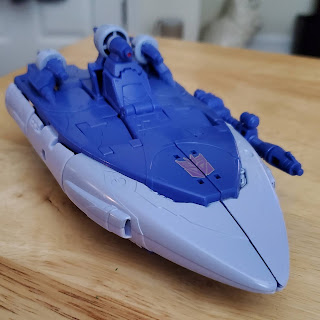 Scourge's transformation is pretty simple, though it doesn't look like it is. Head folds down into his chest, legs up, and his arms lay down his side by way of weirdly placed hinge at the shoulders. As you'd expect, those evil wings are the sides of his alt mode. Which is a spaceship that looks like a boat.

The term cybertronian hovercraft has been thrown around a lot, and it originally was intended to be a land based mode. I prefer it as a spaceship though. It's weird and funky looking. If the space robot devil changes some corpses into new servants, they should be weird looking. Dammit.

Scourge's rifle doesn't hide anywhere within his cavernous space ship, instead plugs onto the side. That's the closest thing I can find to a fault on this toy. I don't even mind it, but the point is a screen accurate depiction and that wasn't where he had it in alt mode. Also included is one of those special effects thingies that plugs onto his gun barrels for laser blasting effects action. It kind of looks like a cross between a loogie and a drill bit. I guess it kind of looks like his particular laser blasts in the movie. 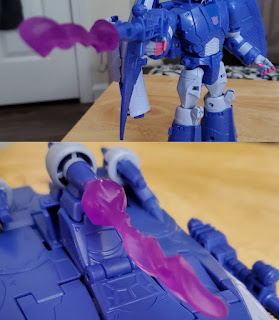 This is an awesome toy. It looks just like how I'd think a toy of Scourge based on his 1986 movie appearance should look. Not just that, but it's specifically sharp. It's nice looking. I used italics because I fucking meant it. Upon seeing it at Target, my wife was very vocal about how cool he was and insisted that I get him right then and there.

I hope to get more if not all of these new Studio Series 86 figures. I'm from that generation of Transformers fans who held the original movie up to an untouchable standard back in the day and kinda still do. Despite how many of these guys I already have, it's nice to have screen accurate figures of the cast specifically meant to represent that particular benchmark.

The box also states he was made from Thundercracker. Somewhere there's a giant argument over that.