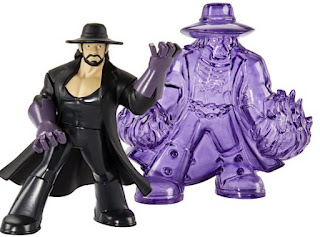 I had recently started noticing these new WWE Beast Mode blind boxes at Walmart and finally bought one this weekend. I'm glad I did, this is a neat little series. Imagine a stylized mini figure of a wrestler with a Pretender shell. Sounds pretty cool huh? That's exactly what you get with these and I'm definitely getting more. The shell is the 'beast mode' making your little wrestler a monster that's hard not to like.
Unfortunately the shell isn't articulated, but the wrestler is at the shoulders and hips. They're pleasantly rubbery and even have a cool blind box delivery system. The pull tag is a 'chain' that you rip off revealing a red cardboard crate. Tear that thing open to see who you got.
I paid around $5 for one and that's not bad. Unfortunately the cool Undertaker in the picture I used above isn't in the currently available series 1. There's a code system to ensure you don't get a million Triple H's thankfully. Just look at the bottom of the box and you'll see a code above the UPC. The last letter dictates which is inside (I got a Rock).
A: Braun Strowman
B: Finn Balor
C: Becky Lynch
D: Roman Reigns
E: Triple H
F: AJ Styles
G: Daniel Bryan
H: The Rock
blind bags blind box keshi mattel mini figures monsters neat Pretender Pretenders toys wrestlers wrestling wwe Zone Base