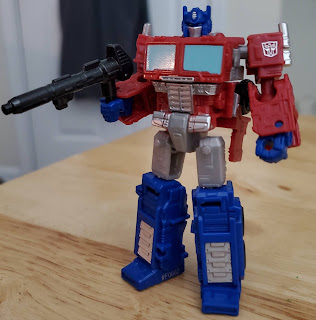 I picked up the new Core Class Optimus Prime from Kingdom this weekend. It's the first non-beast Kingdom toy I've gotten, so it almost feels weird. Even though it's not a strictly Beast Wars line, that's exactly where my focus towards it has been going. One of the things I like about Kingdom is that it's a solid mix of beast era and classic TF. It's pretty much what I wanted during the beast era.

I've been pretty fond of these Core Class bots so far and it's nice to get my hands on a vehicular based one. Beast Wars guys usually come off great on a small scale, but the boxy vehicular robots can be hit or miss. From what I've seen so far they look great, but nothing beats having one in hand to form your own opinion.

Optimus is pretty good. I don't think just how small these guys are comes across well in pictures, but they're pretty small. Some people would compare a Core Class with a Legend/Commander/Scout/Basic sized toy from the past, it's not really a fair comparison. While Rattrap felt pretty similar in scale to his original BW toy, Optimus feels pretty tiny here. That's just the reality of transformers, some toys are going to be a little bigger or smaller depending on things. A box on wheels is going to be more compact than a rat when turned into a robot. The big difference between Core Class and the prior smaller toys I mentioned above is the articulation.

Prior smaller toys normally had an acceptable amount of articulation. Core class so far has had quite a bit. Usually I don't hark on things like toy engineering. Mainly because it's only common sense that things improve over time. However in this case, it's actually impressive in just how far the skill of the designers has come. These are much nicer toys than the smaller toys that were out just a few years ago. Slightly smaller, but for the same price. That's a fair trade off. I will say though, I did have a little trouble transforming Optimus here. He wasn't difficult, but that smaller form did cause my giant hands to fumble a little bit. A couple more transformations and it'll be second nature, I'm sure. That's going to happen occasionally and not really a problem. I've been pretty happy with Core class so far and Optimus is another happy toy purchase. 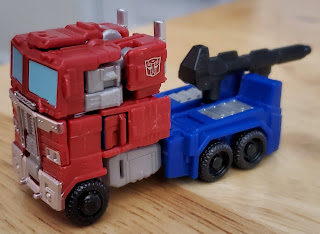