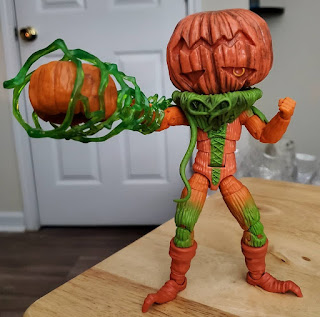 It's the first week of January, hard to believe it's already Halloween time. No it's not, this is Zone Base where everyday is Halloween! Speaking of Halloween, boo! Another of the Christmas gifts from my wife (there is going to be a bit of these posts for awhile) was the new Pumpkin Rapper figure from the Power Rangers Lightening Collection. I probably don't have to tell you this but, I've always liked him.

Pumpkin Rapper hails from the Mighty Morphin Power Rangers. Which as boring as that may be to some Power Rangers fans, is my favorite era of the show. However the character isn't from original Super Sentai footage. Instead from the new footage Toei had made for Saban as they had burned through Zyuranger episodes and needed more content.

Like Frankenstein, Pumpkin Rapper is another Halloween episode monster... and the coolest one in my opinion. He appeared in two different Halloween episodes. In 'Trick or Treat' as the main villain and returning in 'Zedd's Monster Mash' which takes place in a haunted forest! 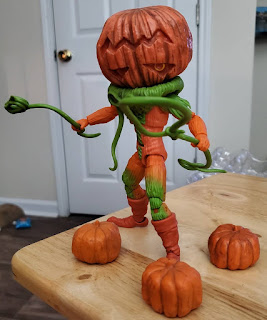 There's been a few figures of the guy. The newest being this Lightening Collection figure, which is a super nice representation. In the box you get the Rapper, three pumpkins, two vines, a magic doo hickey, and 2 sets of hands. One set can hold things, like the vines. The other is in dramatic positions for dramatic posing with one hand in a fist and the other open. Dramatically.

The two vines can be held as weapons to be used a whips and lassos. The pumpkins can be placed over the heads of Rangers or the Putty Patrol to recreate the big battle in 'Trick or Treat'. The magic doo hickey can be placed over his arm to show him casting those spooky spells. You can put a pumpkin in it as well, it's neat.

The figure is very well articulated with all sorts of joints that move all sorts of ways. I think the only thing keeping you from putting him into any pose possible would be that giant noggin. 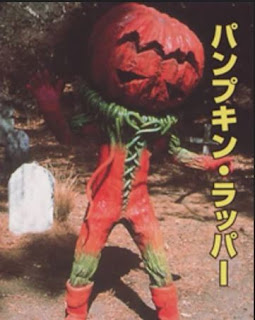 It's an awesome higher grade figure of one of my favorite Power Rangers monsters. I love a pumpkin headed freak and he fits the bill with that specific flair that comes from a Japanese production.

From various shows, cartoons, and games, I've always loved the Japanese style of portraying monsters. That specific style on something that represents my favorite time of year is impossibly irresistible.

Halloween is quite a ways away, even with the way I celebrate it. Throughout the year I'll watch random specials and commercials, because I just love it in general. Something like this is another fun way to experience the season all year long. It doesn't hurt that it's a excellent figure either.

Ooh, you Rangers make me mad; waking me up with a rap that bad.