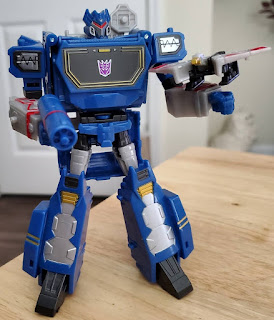 After Christmas, like many of you, I was doing a gift card shopping spree. While doing so, I lucked up upon the new deluxe Cyberverse Soundwave figure. I've liked the warrior class version of Soundwave and jumped at the nicer toy.

The design is a cool mix of traditional G1 Soundwave and Euro G1/Early G2 styling. The old school nature of the warrior class toys made him feel like one of those late G1 European toys lost in time. The deluxe is like a modern Generations update of that toy.

Soundwave comes with Laserbeak who turns into a cassette that can be loaded into his chest. However Soundwave turns into a type of armored truck instead of a tape deck. They don't make those anymore, shit happens. I do like this truck a lot. Not sure if it'd make a good communications truck, but it looks cool. 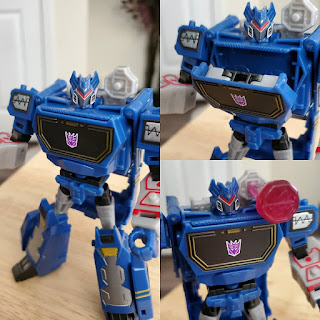 Like I said, Laserbeak can store in Soundwave's chest. What I didn't say was he can also perch on his arm or shoulder via a peg. There's also an action effect thingy that you can plug into his radar dish or gun. That's to show a sonic attack emitting from the dish or gun. It's in his name. It's a sound wave.

Laserbeak is pretty basic and hollow. Considering he's not much more than an accessory, I guess that's understandable. It would have been nice if he was a little better. He makes me think of those trays Coke vendors have the bottles in while they refill the cooler at Circle K. Like if one of those was broken and it kinda looked like a bird.

Soundwave himself is a decent figure. He's got a good bit of articulation and his transformation isn't too hard. There's some hollow parts from storage in alt mode present in robot mode. There's also that big backpack that's the trucks roof. It's a little in the way. Honestly it just feels like he needed another pass over in the design stages. Not bad though, just could have been a little better.

It's hard not to like this version of Soundwave, those design cues just look so good. I'd love to see some repaints inspired by his Machine Wars toy or even a Stalker made from this toy. The thought of a Ghostbusters version just popped in my head and I can't ignore it. A little far fetched... but I kinda thing it'd be awesome. Admittedly, I have Ghostbusters on my mind. As usual. Afterlife yo. 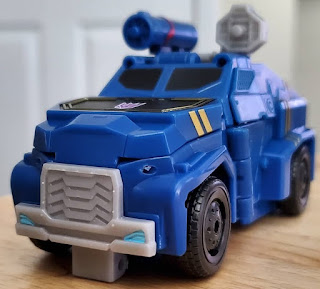